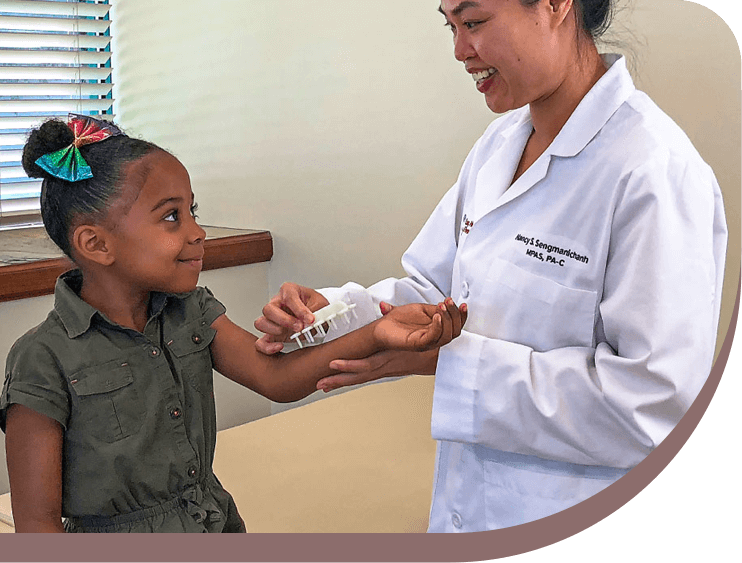 A variety of environmental allergens, such as pollen and animal dander, can trigger allergic reactions in the nose (allergic rhinitis, or hay fever) and in the lung (asthma). Not all reasons for susceptibility to environmental allergies are understood, although a family history of allergies is an important risk factor.

Acute and chronic allergic diseases can affect a person’s quality of life, are a leading cause of work and school absenteeism and can impair the ability of individuals to carry out common daily activities.

A healthcare professional will take a medical history. You will be asked about your health, your symptoms and whether members of your family have asthma or allergies such as hay fever, hives or skin rashes like eczema. You will be asked about your symptoms. The doctor will want to know when symptoms occur, how often they happen and what seems to bring them on. Information about your work, home and eating habits can provide clues to help pinpoint your allergy.

A healthcare professional may perform skin, blood, or allergy component tests to help diagnose environmental allergies. Tests can be done for common allergens such as plant pollens, molds, dust mites, animal dander, insect stings and various foods such as peanuts, eggs, wheat, shellfish and milk. Testing also is available for some medicines, such as penicillin.

A skin prick test can detect if a person is sensitive to a specific allergen. Being “sensitive” means that the immune system produces a type of antibody called IgE against that allergen. IgE attaches to specialized cells called mast cells. This happens throughout the body, including the lining of the nose and the airways, as well as the skin.

During a skin prick test, a healthcare professional pricks the skin on the arm or back and places a tiny amount of allergen extract just below the skin’s surface. In sensitive people, the allergen binds to IgE on mast cells in the skin and causes them to release histamine and other chemicals that produce itching, redness, and minor swelling.

An intradermal test injects the allergen with a very fine needle under the first few layers of the skin. This type of skin test may be used when the result of a prick test is not clear.

Instead of performing a skin test, doctors may take a blood sample to measure levels of allergen-specific IgE antibodies. Most people who are sensitive to a particular allergen will have IgE antibodies detectable by both skin and blood tests.

As with skin testing, a positive blood test to an allergen does not necessarily mean that a person’s symptoms are caused by that allergen.

One reason why a positive skin or blood test does not always indicate that a person’s symptoms are caused by a particular allergen is that allergens have many different components, some of which are more likely to cause symptoms than others. For example, birch tree pollen contains proteins, sugars, and fats. IgE antibodies to birch pollen proteins are likely to cause allergic reactions, but IgE antibodies to the sugars in birch pollen, although common, are less likely to cause allergic reactions. Allergy component tests are blood tests that can determine exactly which component of an allergen the IgE in a person’s blood recognizes. This can help a health professional determine whether the allergen is likely to cause symptoms.

Antihistamines: Antihistamines are the most widely used medication to help treat and prevent symptoms caused by allergens. These medications help to block histamine from being used during a period of allergic reactions, therefore decreasing your symptoms.

Nasal Spray: Nasal sprays are also a common medication used to treat symptoms caused by allergens. There are two common types that your allergist may prescribe for you depending on your symptoms; an antihistamine or steroid based nasal spray. Nasal sprays work by decreasing inflammation and blocking histamine during a response to an allergen.

Oral corticosteroids: Oral steroids are used in situations when allergic reactions worsen and do not responding to your usual medication regimen, exacerbation of asthma, or in certain skin conditions. Steroids help to decrease inflammation in your body by decreasing your immune systems reaction to foreign a stimulus.

Eye Drops: Eye drops are used for those who suffer from allergic conjunctivitis (allergies of the eyes). Eye drops come in two types; antihistamine and steroid based. Eye drops work by decreasing inflammation and blocking histamine during a response to an allergen.

Oral and nasal decongestants help shrink the lining of the nasal passages, relieving nasal stuffiness. Decongestant nose drops and sprays are intended for short-term use. When used for more than a few days, these medicines may lead to even more congestion and swelling inside the nose. Doctors may recommend using decongestants along with an antihistamine because antihistamines do not have a strong decongestant effect.

Leukotriene receptor antagonists, such as the prescription drug montelukast, block the action of leukotrienes, chemical messengers involved in allergic reactions.

Cromolyn sodium is a nasal spray that blocks the release of chemicals that cause allergy symptoms. The drug causes few side effects but must be taken four times a day.

Immunotherapy injections (IT): also known as allergy shots, is a long-term treatment option for those that suffer from environmental allergies and asthma. IT can help to decrease your sensitivity to allergens, lessening your symptoms and triggers that exacerbate allergies and asthma.

A small amount of allergen serum is injected subcutaneously into the skin and increases with tolerance to a therapeutic level. There are two phases with IT; building phase and maintenance phase. The building phase consists of weekly injections of serum that increase in strength each week and generally last 6 months depending on compliance. During the building phase you may start to notice a decrease in your allergy symptoms, but it can take as long as 12 months on maintenance dose to notice improvement. The maintenance phase occurs once a therapeutic level has been reached. The strength depends on your sensitivity and tolerance to the serum. During this phase injections are given every 2-4 weeks, which will be established by your allergist. Maintenance phase is usually continued for 3-5 years depending on the success of the treatment. The decision to discontinue IT will be made with your allergist

Asthma medications are divided into two categories: relievers and controllers. Relievers are used for asthma attacks and not for long-term treatment of the disease. Controllers are used to prevent asthma symptoms. For controllers to work properly, people with asthma have to use them consistently, even when feeling well.

Short-acting beta-agonists (SABAs) such as albuterol can provide immediate symptom relief that lasts four to six hours. They do not decrease allergic inflammation but instead relax the muscles around the airway that tighten when an allergic person is exposed to an allergen or other asthma trigger. For people who rarely experience asthma attacks, SABAs may be used as the only medicine on an as-needed basis. People who are taking controller medicines often use SABAs for symptom relief.

Inhaled corticosteroids are effective at improving quality of life and preventing severe asthma attacks in people with persistent asthma. These medications can sometimes cause yeast infections in the mouth. If given in very high doses for long periods, they may cause some of the side effects typical of oral corticosteroids, such as brittle bones and an increased risk of cataracts. People with moderate to severe asthma may take inhaled corticosteroids along with other drugs called long-acting beta-adrenergic agonists.

Leukotriene receptor antagonists (LTRAs) block the action of leukotrienes, chemical messengers involved in allergic reactions. They may be used alone to treat mild asthma or along with an inhaled corticosteroid to treat moderate asthma, as well as to treat allergic rhinitis. People who have both mild asthma and allergic rhinitis can take an LTRA to treat both conditions.

A related medication, called zileuton, prevents leukotriene production by blocking an enzyme called 5-lipoxygenase. Zileuton is only used for severe asthma, and evidence suggests that it may be particularly useful for people with asthma who have reactions to aspirin, a syndrome called aspirin-exacerbated respiratory disease, or AERD.

Doctors may recommend cromolyn sodium to treat mild asthma in young children. Liquid cromolyn sodium is placed in a mist-generating machine called a nebulizer, and children breathe in the mist.

The Food and Drug Administration has approved the injectable medicine omalizumab to treat allergic asthma. Omalizumab works by binding to IgE, the antibody responsible for allergies, and removing it from the body. Omalizumab can prevent severe episodes of asthma in people whose asthma is not adequately controlled by other medicines.