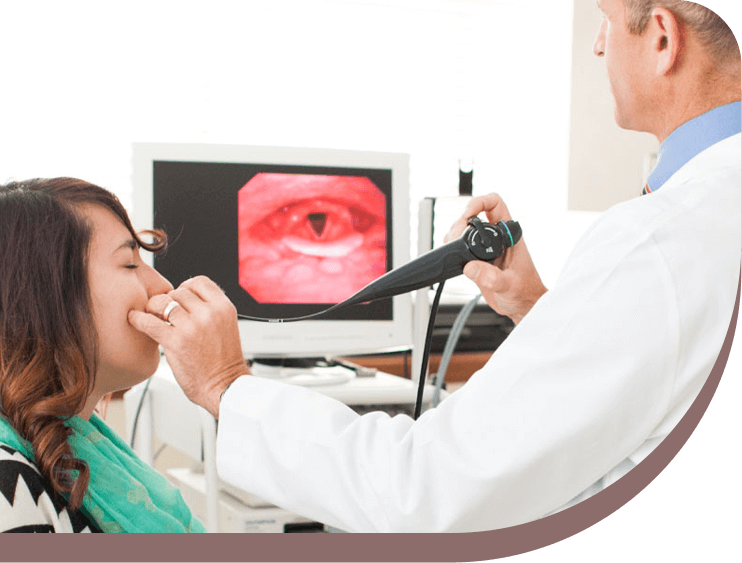 In some cases, reflux can be SILENT, with no symptoms until a problem arises. Almost all individuals have experienced reflux (GER), but the disease (GERD) occurs when reflux happens on a frequent basis often over a long period of time.

During gastroesophageal reflux, the acidic stomach contents may reflux all the way up the esophagus, beyond the upper esophageal sphincter (a ring of muscle at the top of the esophagus), and into the back of the throat and possibly the back of the nasal airway. This is known as laryngopharyngeal reflux (LPR), which can affect anyone. Adults with LPR often complain that the back of their throat has a bitter taste, a sensation of burning, or something “stuck.” Some may have difficulty breathing if the voice box is affected.

The symptoms of GERD may include persistent heartburn, acid regurgitation, nausea, hoarseness in the morning, or trouble swallowing. Some people have GERD without heartburn. Instead, they experience pain in the chest that can be severe enough to mimic the pain of a heart attack. GERD can also cause a dry cough and bad breath. Some people with LPR may feel as if they have food stuck in their throat, a bitter taste in the mouth on waking, or difficulty breathing although uncommon.

If you experience any symptoms on a regular basis (twice a week or more) then you may have GERD or LPR. For proper diagnosis and treatment, you should be evaluated by your primary care doctor for GERD or an otolaryngologist—head and neck surgeon (ENT doctor).

In adults, GERD can be diagnosed or evaluated by a physical examination and the patient’s response to a trial of treatment with medication. Other tests that may be needed include an endoscopic examination (a long tube with a camera inserted into the nose, throat, windpipe, or esophagus), biopsy, x-ray, examination of the throat and larynx, 24 hour pH probe, acid reflux testing, esophageal motility testing (manometry), emptying studies of the stomach, and esophageal acid perfusion (Bernstein test). Endoscopic examination, biopsy, and x-ray may be performed as an outpatient or in a hospital setting. Endoscopic examinations can often be performed in your ENT’s office, or may require some form of sedation and occasionally anesthesia.

Symptoms of GERD or LPR in children should be discussed with your pediatrician for a possible referral to a specialist.

Most people with GERD respond favorably to a combination of lifestyle changes and medication. On occasion, surgery is recommended. Medications that could be prescribed include antacids, histamine antagonists, proton pump inhibitors, pro-motility drugs, and foam barrier medications. Some of these products are now available over-the-counter and do not require a prescription.

Children and adults who fail medical treatment or have anatomical abnormalities may require surgical intervention. Such treatment includes fundoplication, a procedure where a part of the stomach is wrapped around the lower esophagus to tighten the LES, and endoscopy, where hand stitches or a laser is used to make the LES tighter.