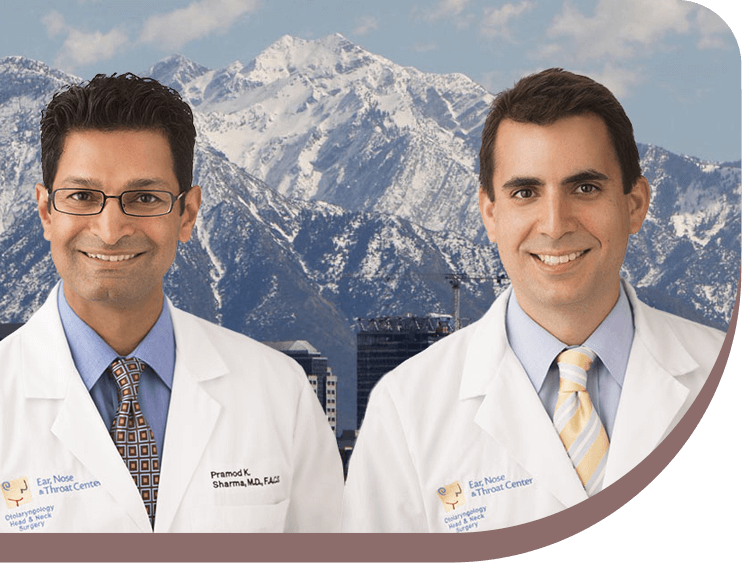 More than 55,000 Americans will develop cancer of the head and neck (most of which is preventable) this year; nearly 13,000 of them will die from it.

Our Head & Neck Surgeons are trained to recognize cancer symptoms, diagnose these conditions, and treat them in our Salt Lake City, Draper and Riverton offices.

In the United States, up to 200,000 people die each year from smoking-related illnesses. The good news is that this figure has decreased due to the increasing number of Americans who have quit smoking. The bad news is that some of these smokers switched to smokeless or spit tobacco, assuming it is a safe alternative. This is untrue. These people are merely changing the site of the cancer risk from their lungs to their mouth. While lung cancer cases are down, some cancers in the head and neck appear to be increasing.

There are a wide variety of tests that are helpful in diagnosing cancer. If it is known that cancer is present, doctors will also be looking to see if the cancer has spread to other sections of the body. For the majority of cancer types, a biopsy (removing a small amount of tissue for testing) is truly the only way of making an accurate diagnosis of the cancer. If a biopsy is not a feasible option, the doctor may recommend other types of tests that will allow a diagnosis to be made. Imaging tests may be used to discover whether the cancer has spread or not. Some tests may also help clarify which treatment options may be the most effective. An easy assessment of yourself may include recognizing the following symptoms:

Treatment options and recommendations depend on several factors, including the type and stage of cancer, possible side effects, and the patient’s preferences and overall health. Many cancers of the head and neck can be cured, especially if they are found early. Although eliminating the cancer is the primary goal of treatment, preserving the function of the nearby nerves, organs, and tissues is also very important. When planning treatment, doctors consider how treatment might affect a person’s quality of life, such as how a person feels, looks, talks, eats, and breathes.

The three main types of treatment for managing head and neck cancer are radiation therapy, surgery, and chemotherapy. The primary treatments are radiation therapy, surgery, or both combined; chemotherapy is often used as an additional, or adjuvant, treatment. The optimal combination of the three treatment modalities for a patient with a particular head and neck cancer depends on the site of the cancer and the stage (extent) of the disease.

The goal of surgery is to remove the cancerous tumor. A small amount of surrounding healthy tissue may also be removed to ensure the tumor has been completely caught. Types of surgery for head and neck cancer include:

In general, depending on the location, stage, and type of the cancer, some people may need more than one operation. Sometimes, it is not possible to completely remove the cancer, and additional treatments may be necessary. For example, surgery may be followed by radiation therapy and/or chemotherapy to destroy cancer cells that cannot be removed during surgery.

Patients should be encouraged to talk with their doctor about side effects expected from the specific surgery and how long the side effects are likely to last. Side effects vary and depend on the type and location of the surgery. Talking with your doctor about what to expect and how to recover can help you cope with side effects.

Radiation therapy is the use of high-energy x-rays or other particles to destroy cancer cells. A radiation therapy regimen (schedule) usually consists of a specific number of treatments given over a set period of time. Radiation can be used as a primary treatment modality, in lieu of surgery. It can also be administered after surgery, alone or given with chemotherapy, in order to decrease the chance of tumor recurrence.

Chemotherapy is the use of drugs to destroy cancer cells, usually by stopping the cancer cells’ ability to grow and divide.

Systemic chemotherapy gets into the bloodstream to reach cancer cells throughout the body. Common ways to give chemotherapy include an intravenous (IV) tube placed into a vein using a needle, or in a pill or capsule that is swallowed (orally).

A chemotherapy regimen (schedule) usually consists of a specific number of cycles given over a set period of time. A patient may receive one drug at a time or combinations of different drugs at the same time. Chemotherapy is administered by a Medical Oncologist.

The side effects of chemotherapy depend on the individual and the dose used, but they can include fatigue, risk of infection, nausea and vomiting, hair loss, loss of appetite, and diarrhea. These side effects may go away once treatment is finished.

Targeted therapy is a treatment that targets the cancer’s specific genes, proteins, or the tissue environment that contributes to cancer growth and survival. This type of treatment blocks the growth and spread of cancer cells while limiting damage to healthy cells.

Recent studies show that not all tumors have the same targets. To find the most effective treatment, your doctor may run tests to identify the genes, proteins, and other factors in your tumor. This helps doctors better match each patient with the most effective treatment whenever possible. In addition, many research studies are taking place now to find out more about specific molecular targets and new treatments directed at them.

For head and neck cancers, treatments that target a tumor protein called epidermal growth factor receptor (EGFR) may be recommended. Researchers have found that drugs that block EGFR help stop or slow the growth of certain types of head and neck cancer.

People often receive treatment for the cancer, and treatment to ease side effects, at the same time. In fact, patients who receive both often have less severe symptoms, better quality of life, and report they are more satisfied with treatment. Your Head & Neck Surgeon will work together with a Medical Oncologist to determine if targeted therapies are appropriate.

If cancer has spread to another location in the body, it is called metastatic cancer. Patients with this diagnosis are encouraged to talk with Medical Oncologists, who are experienced in treating this stage of cancer. In many cases, there can be different opinions about the best treatment plan. This discussion may include clinical trials.

Your health care team may recommend a treatment plan that includes a combination of surgery, radiation therapy, chemotherapy, and targeted therapy.

For most patients, a diagnosis of metastatic cancer is very stressful and, at times, difficult to bear. Patients and their families are encouraged to talk about the way they are feeling with doctors, nurses, social workers, or other members of the health care team. It may also be helpful to talk with other patients through a support group.

Remission and the chance of recurrence

A remission is when cancer cannot be detected in the body and there are no symptoms. This may also be called having “no evidence of disease” or NED.

A remission may be temporary or permanent. This uncertainty causes many people to worry that the cancer will come back. While many remissions are permanent, it is important to talk with your doctor about the possibility of the cancer returning. Understanding your risk of recurrence and the treatment options may help you feel more prepared if the cancer does return. If the cancer does return after the original treatment, it is called recurrent cancer. It may come back in the same place (called a local recurrence), nearby (regional recurrence), or in another place (distant recurrence).

When this occurs, a cycle of testing will begin again to learn as much as possible about the recurrence. After testing is done, you and your doctor will talk about your treatment options.

People with recurrent cancer often experience emotions such as disbelief or fear. Patients are encouraged to talk with their health care team about these feelings and ask about support services to help them cope.